Edmunds: Upstart Genesis G70 holds its own with BMW 3 Series 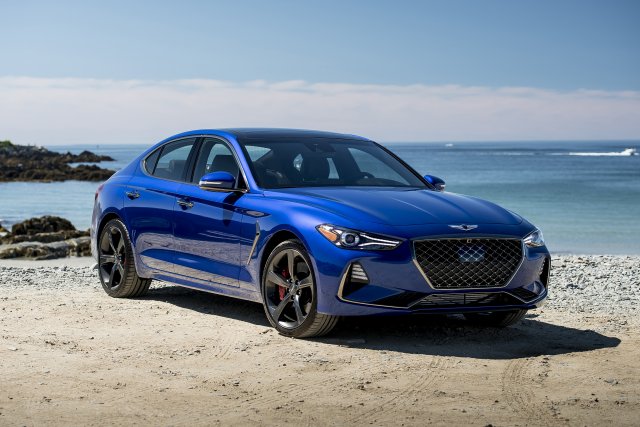 Genesis is a new but growing luxury automotive brand that's been winning over consumers with great value and high quality. Leading the charge is the 2019 Genesis G70, the brand's all-new small sedan that it hopes will appeal to shoppers looking for sporty and invigorating performance. Notably, this exact demographic has long been claimed by BMW and its 3 Series sedan.

BMW has completely redesigned its 3 Series for 2019, giving it fresh styling, more power and new technology features. Edmunds compares the upstart G70 to the benchmark 3 Series to find out which one is the better small luxury sport sedan.

PERFORMANCE AND HANDLING
BMW has a long-running advertising tagline of "The Ultimate Driving Machine." And Genesis must have been paying attention, as it recently hired some top ex-BMW employees to help design its cars. The results show. The G70 has two available engines: a 252-horsepower four-cylinder or a 365-horsepower V6. The V6, in particular, delivers the kind of effortless thrust we expect from this kind of car. The G70 is also impressively lively and engaging to drive around turns.

The latest 3 Series has plenty of the brand's trademark dynamic luster. BMW offers two engines that feel stronger than the G70's: a 255-horsepower four-cylinder engine and a 382-horsepower six-cylinder. The 3 Series also has excellent steering and very controlled handling.

Overall, these two sedans are pretty evenly matched for being fun to drive. Yet it says a lot that the G70 can go toe-to-toe with the newest 3 Series.

LUXURY AND UTILITY
Most drivers will be impressed with the G70's cabin. The available quilted leather upholstery, for instance, looks exceptional. But much of the switchgear comes from Genesis' parent company, Hyundai. While the buttons and switches are easy to read and use, the feel of them isn't quite up to the standard of the best European sedans.

The new 3 Series is a high watermark for the nameplate. The interior trim is excellent, and there's a luxury heft to all of the controls. The design is more subdued than what you'll find in other luxury cars, but it's unmistakably premium. On the downside, the controls aren't as easy or intuitive to use as the G70's.

Both cars provide comfortable seating for front-seat passengers. The 3 Series has a definite advantage in back, however, as it offers more headroom and legroom for rear passengers. It also boasts significantly more trunk space.

FEATURES AND TECHNOLOGY
BMW has thrown its entire bag of tricks at the new 3 Series. For instance, a redesigned infotainment system features a new voice assistant that allows you to adjust many of the car's controls just by speaking naturally. Unfortunately, the learning curve for operating the infotainment system is steep as many of the on-screen menus are convoluted.

The Genesis doesn't offer the same high-end vibe. Its infotainment system is similar to what you'll find in a Hyundai, for instance, and it doesn't have as many trick features or flashy graphics. But it's easier to use than the BMW's and comes standard with Apple CarPlay and Android Auto smartphone integration. In contrast, BMW doesn't offer Android Auto, and Apple CarPlay is an option that requires annual subscription payments to keep working.

Both cars received the Insurance Institute for Highway Safety's highest Top Safety Pick Plus rating and offer many active safety features and driver aids. Just about all of them come standard on the G70. BMW, for its part, reserves some of these safety features as options. But it also offers a few extras you can't get on the G70, such as a lane centering system that can make cruising on the highway easier for the driver.

PRICE AND VALUE
Genesis is aiming to increase the G70's appeal by undercutting luxury competitors on price. A four-cylinder G70 2.0T starts at $35,895, while the four-cylinder BMW 330i starts at $41,245 (both prices include destination fees). This spread continues all the way up the line: Load up a range-topping, all-wheel-drive six-cylinder M340i, and you're looking at more than $65,000. The price of a maxed-out all-wheel-drive G70 3.3T will be less than $55,000.

EDMUNDS SAYS:
Overall, we give the slight nod to the upstart G70. The new 3 Series is impressively polished and advanced. And although the G70 can't quite match the 3 Series on refinement, it wins out by offering more fun and value for the money.